The Oxford dictionary defines a runner as "someone who runs". So that's a pretty wide range of scale for defining yourself as a runner. Is that one run a year, a week, running every day, run in races? Many of my friends who I would class as runners do not think of themselves in that way and after thinking about myself and my running habits I began to think the same. So, a question for all of your runners out there. At what point in your life did you actually begin to call yourself a runner? Those who know me know that my training for races is virtually non existent, and if I do train then the runs are so sporadic and randomly spaced that it could hardly be called a training plan. I have as yet not caught this running bug that so many of my friends have, although this being said I absolutely love taking part in races no matter if it's a small 5k or a huge ultra marathon and I am sure that there are people out there who feel the same way.

Is this enough running to call myself a runner?

I have always wanted to catch this elusive bug and get the feeling of actually wanting the morning to come so I can get out for a run. I want to know how all of these people who I class as runners actually feel, having all of that extra energy to burn, the runner's high in your lunch break after finishing a quick 5km between meetings. No matter how much I force myself to go out and run it is never there. I have run multiple ultra marathons over 50 miles long as well as multi day races, marathons and every race down to fun runs, yet  I would still not class myself as a runner, possibly for the sole reason that I have never found that full love for running. Now all this may sound very, very bizarre coming from someone who is 6 months away from running 4,000+ miles across a continent, and in a way I have to agree. But for me what I do love about running is the challenge, pushing yourself to achieve things that you never dreamed possible, and make friends with people who you would never have met otherwise. Not the part that you would actually call "running". Running for me is more about the family, the journey and the experience, not the actual running itself. That made me think, is the definition of a runner more than just someone who runs? Could you call yourself a runner if you just run races for the experience, or to meet people? Or is a runner actually someone who goes out and runs everyday. Maybe the definition of a runner dependent on who is calling you a runner. Someone who does parkrun every week may think that a marathoner is a runner and not them, and a marathoner may think someone running ultra races is a runner and not them, or maybe I am just over analyzing it and I am a runner after all! But to be fair though, I still don't see myself as a runner, even if other people do. Everytime I complete a longer distance event I ask myself the same question, and the answer is always, maybe after the next distance. I would love to get your thoughts on how you would class a runner, and do you think of yourself as a runner or not? Number of times I have used the word runner in this post: 27... On another note as most of you know I have been nominated for a running award in the Online Publications category! If you can spare a minute or two I would love it if you could click on the image below and go to vote for me as "Corner To Corner USA". The voting for this round closes at the end of November, so there is still time for you to help me get shortlisted :) [caption id="attachment_788" align="aligncenter" width="235"] 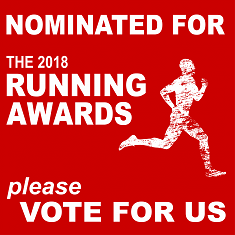