So, my first state is done. 282 miles down and just short of four thousand left to go. To be fair that feeling of crossing any state line is monumental, but when you cross the first you really start to think that you're getting somewhere. I crossed over into New Hampshire into the picturesque town of Dover where I was set to meet up with another former crosser, Jessica Goldman. Jessica finished her crossing back in 2014 when I had just decided to start planning my adventure. Although she is actually a hardcore runner. Like the ones who run a 60 mile day with no effort needed. A little crazy! She was incredibly helpful with helping me out through my planning stages whenever I came up against a problem, so I was very excited to finally meet up.

Jess had organised me several places to stay throughout New Hampshire, thoughtfully most of then had a cat to keep me entertained. When I finished my 27 mile day into Dover, Jess and her mum were waiting there with a huge sign and bag of goodies to welcome me. Could I have asked for a better welcome? After showering and a quick freshen up of clothes we headed out to a local brewery for some food and to meet up with some of the Six03 endurance club. Six03 advertise themselves as a team of fun people who share a passion for the outdoors and social community. Unfortunately I arrive a day to late to join in with their run to the local pub! [gallery ids="1276,1248,1244,1245,1257,1250"] After a great stay being hosted in Dover I started my very long trek inland and off to the Californian sun. Thankfully Jess has so many contacts throughout the New Hampshire area I ended up being hosted for the next 4 nights. Of cause they all had cats to keep me company!

One thing that I learnt very quickly after I left Dover, New Hampshire is stunning. The scenery draws a lot of similarities from the UK which makes it obvious to why the settlers named the area New England. Heading out onto the quieter back roads that wiggle through the rolling hills you'll come across tiny villages along the sides of rivers and cascading waterfalls. Looking back to 4 months ago it seems like a lifetime since I sat in front of them eating lunch. I also have to say that my body was beginning to get accustomed to moving large distances every day. At the start I was finding a 22 mile day to be a long day. Now, my fitness was building and i'm hitting 25 a day, with a few walks up the hills. I guess that this was good practice for what was to come in Vermont, my next state. I didn't mention before that my ankles were suffering during the first 10 days on the road. My achilles on both sides were the size of tennis balls and i was very close to calling it a day before I had left Maine. Miraculously though I woke up one morning and all of the swelling had reduced and I was having no more pains. How it recovered so quickly I will never know, but there have been no problems since. [gallery ids="1263,1233,1256,1255,1261,1281,1280,1282,1284"]

Even though I passed through the state within a week I still have some great memories from it. Not only from the cats and breweries. I had the chance to meet up with an old school friend who I hadn't seen for over 10 years. Amy had moved out to Vermont, is now married and has a mini human, Oscar. We all met up for dinner when I arrived in the collage town of Keene with the Spring sun shining. It was amazing to have a catch up with someone I hadn't seen for so long especially as 90% of the people I talk to along the route only spend a few minutes chatting about the run. Just like Maine i'd love to revisit New Hampshire in the summer and Autumn. As I was leaving the State everything was just turning to green and the flowers were emerging. Somewhere else to add to my list of places to visit again! Next on the list of up-and-coming States is Vermont with its beautiful, although exhausting, mountain ranges. Another very small state for me to cross through but it was made much more enjoyable with the company I had. 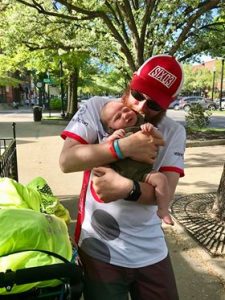